Usually our friends over at Zippa create fun rankings of states. They have had the best states to live in, the most fun states, and many others, but they held nothing back with this one. They ranked states based on how attractive they are. Iowa and Illinois are just solid average looking states apparently.

Looks are important to many. About 64% of Americans said the first thing they notice about someone is how attractive they are. While we aren't in the top 10 for looks both Iowa and Illinois are also avoiding the bottom 10.

The top 5 most attractive states were:

Well hey good for them, must be nice to rank so high on the list...

The Ugliest States were:

Iowa ranked number 38, while Illinois ranked 21. As an Iowan those results hurt a bit, but congratulations to Illinois for being more attractive than us. Still we both ranked pretty low on the list meaning our states are average. 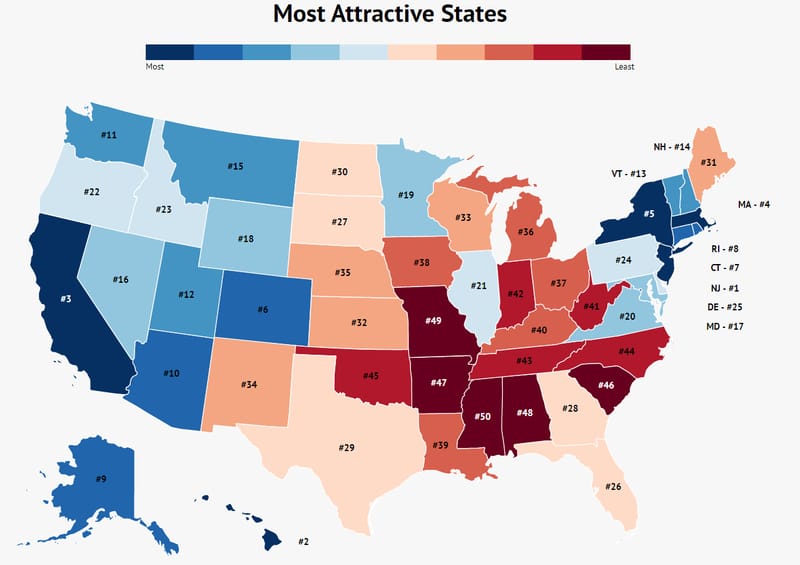 Now these results may seem superficial, but there is apparently some science behind it. Zippa stated how they got their info,

We ranked each state in 5 categories:

They also shared some other results from their study.

That just begs the question of which states are the most attractive. Well, we’ve got the answer. We found the states where people are the least obese, have high activity levels and don’t have STDs.

How high did your state rank?

LOOK: Here are the 50 best beach towns in America

Every beach town has its share of pluses and minuses, which got us thinking about what makes a beach town the best one to live in. To find out, Stacker consulted data from WalletHub, released June 17, 2020, that compares U.S. beach towns. Ratings are based on six categories: affordability, weather, safety, economy, education and health, and quality of life. The cities ranged in population from 10,000 to 150,000, but they had to have at least one local beach listed on TripAdvisor. Read the full methodology here. From those rankings, we selected the top 50. Readers who live in California and Florida will be unsurprised to learn that many of towns featured here are in one of those two states.
Keep reading to see if your favorite beach town made the cut.
Filed Under: Am I attractive, How attractive is Illinois, How attractive is Iowa, How attractive is the Quad Cities, How ugly am I, How Ugly is Illinois, How ugly is Iowa, How ugly is the Midwest, How ugly is the Quad Cities
Categories: Articles
Comments
Leave A Comment
QC Commuters Groan as Lane Closures on I-74 Bridge are Expected Tonight
UFO?! Watch This Bright String of Lights Fly Across Iowa
Frost Advisory In Effect Tonight For Parts of Iowa & Illinois
Oktoberfest Celebrations Coming Up In Moline & Davenport
Get Fit & Win Cash At Farrell’s Extreme Bodyshaping In Bettendorf
Where The Buffalo Roam: This Iowa VRBO Western Cabin Is On A Buffalo Ranch
B100 Happy Hour Is Every Thursday
Maroon 5 Announce Las Vegas Residency Amid Frontman Adam Levine’s Affair Scandal
Barbecue, Pizza, & Beer-Illinois’ Route 84 has Some Hidden Gems This time of year