How rude! Sorry, I had to get my Full House reference in there. But on a for real note, Illinois, WTF?! Illinois has ranked as one of the rudest states in the country, according to a new survey. I will say, even if you take Chicago out of the equation, ya'll are still pretty rude.

A new study has come out from our friends at Zippia showing just how rude each state is. To determined which states are the rudest, and which ones are the nicest, Zippia looked at 4 areas:

First, Zippia looked at the percentage of rude drivers, according to Insurify. A bad driver is defined as drivers with failure to yield violations, failure to stop violations, improper backing, passing where prohibited, tailgating, street racing, and hit-and-runs on their record. The more your have, the ruder you probably are. Or just a terrible driver.

Zippia then turned to Square to find what the average tip is in each state. If you tip like trash, you're most likely someone no one wants to be around.

To look at the amount of cursing to customer service agents there are in each state, Zippia looked at LivePerson’s rankings in that category to help show how rude each state is.

Finally, Zippia went to a YouGov survey of 75,000 Americans to find what percent of respondents thought each state’s residents were “more rude” than most other Americans.

After compiling all of that data, Zippia found the rudest and nicest states: 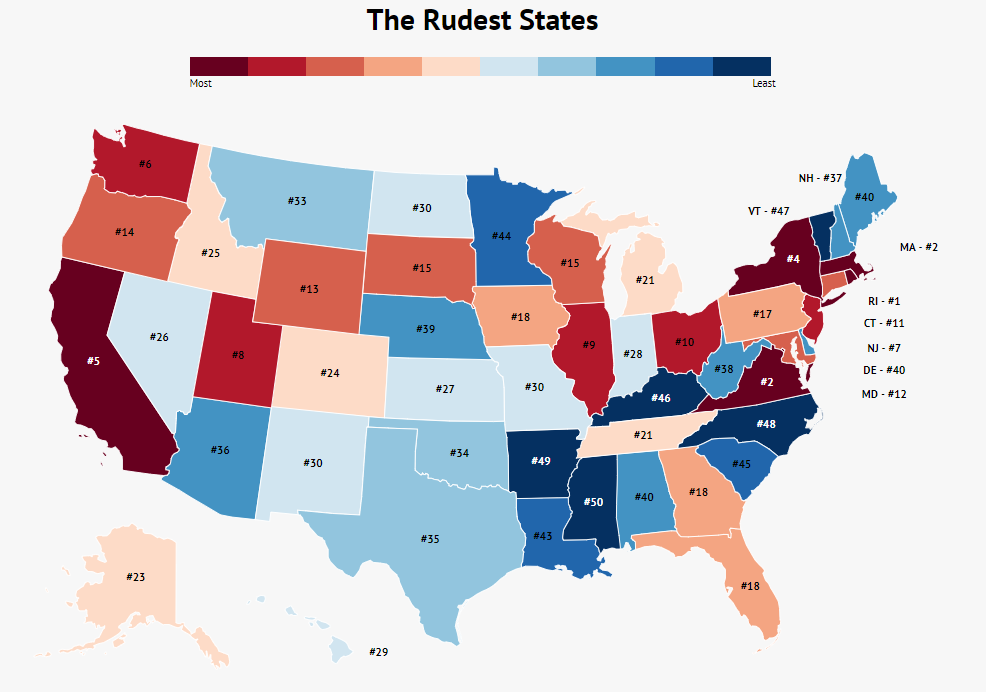 Zippia found that between Iowa and Illinois, Illinois is a lot ruder than Iowa. Here are some statistics that Zippia found to put Illinois at #9 on this list:

Iowa is in a three-way tie with Georgia and Florida for the 18th spot. Iowans give a 17% tip on average, and the percent of rude drivers is 4.

LOOK: Here are the 25 best places to live in Iowa

Stacker compiled a list of the best places to live in Iowa using data from Niche. Niche ranks places to live based on a variety of factors including cost of living, schools, health care, recreation, and weather. Cities, suburbs, and towns were included. Listings and images are from realtor.com.
On the list, there's a robust mix of offerings from great schools and nightlife to high walkability and public parks. Some areas have enjoyed rapid growth thanks to new businesses moving to the area, while others offer glimpses into area history with well-preserved architecture and museums. Keep reading to see if your hometown made the list.